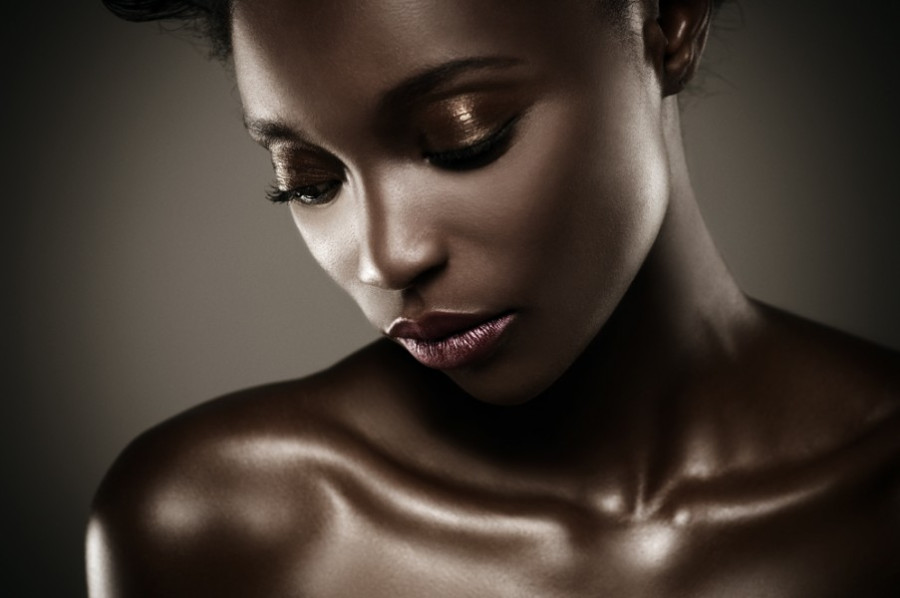 Melanin is a chemical, made up of subunits of chemicals which are influenced by enzymes (protein molecules used to digest food, produce energy, and purify the blood) to build a stable and resilient compound. This compound is distributed through the body of pigmented people (Kittles 1995).
This stable and resilient compound gives many benefits to the body of melinated people.
The importance of melanin is hidden all too often for a variety of reasons but it is fundamental we can identify where is resides in us and why this extremely precious chemical makes us so unique.
Melanin can appear in a variety of different colours but is predominantly black or dark in colour and is found in the earth as well as throughout the human body.
Melanin is in all of us and is situated in many areas such as:

African (Black) people tend to have more organs that contain high concentrations of melanin. It is fundamental to remember melanin is a gift responsible for many of our capabilities.
Melanin is the basis of pigment and even in the first stages of human life as an embryo melanin is present as the body forms in a variety of essential regions such as the brain, hair, skin, eyes and genitals.
It is important to recognise the immense strength of melanin which appears to be a substance that is almost indestructible. Studies illustrates that when exposed to 600°c melanin still retains nearly 50% of its original properties, it has a strong resistance to decay and can also be found in 1,000 year old mummies.

What does it do?

Melanin is used by the body for the conversion of energy and protects cells from toxins (Moore 1995).
The importance of its colour is fundamental because it is the dark skin or substance which absorbs. Melanin is black in colour because its chemical structure does not allow any energy to escape once it has come in contact with it (Barnes 1988).
Energy such as the light from the sun or vibrations from sound travels until it makes contact with melanin found in our skin or other areas. Once contact is made the melanin will absorb this energy.
We can see practical examples of this even in clothing as we avoid wearing black in the summer because it absorbs too much heat.
Melanin is a dark substance that is essential for us to absorb from our environment, the psychological processes such as sensation and perception are very dependent on how our melanin functions.

In the skin melanin protects from the weather conditions, and the healing of wounds shows evidence of melanin activity too. Damaged cells turn dark as the melanin works to prevent further damage and stimulates healing, similar to when a cut fruit is exposed to air.
For our protection melanin is able to accumulate several compounds such as drugs that can be held in melinated regions in the body for long periods in time. The melinated (type of melanin in the brain) protects cells with pigment by keeping hazardous substances bound and released slowly in a low, non toxic concentration (Moore 1995).
It is argued by people such as Barnes (1988) that this would mean the affects of drugs on the body have a higher potency in highly melinated people because the binding process of the harmful substance cause worse drug addictions to the detriment of the black community. The protection trait of melanin is so much so that it can absorb too much leading to toxic conditions. In some cases this could mean neurodegenerative disorders in the brain like Parkinson’s disease.
The power of melanin to absorb is huge and for this reason melanin can be a blessing but can also work against us too, as it is able to take in the very good but it also absorb the very bad things too. Smoking, drinking and drugs all have a more intense and in many ways worse affect on us because we consume so much through our melanin.

MELANIN IN THE BODY

In the body melanin is responsible for a variety of functions including energy conversion, control of organs cyclical rhythms, melodious and rhythmical speech and much more (L.O. Afrika 2004).

Melanin is located in strategic places around the body to where conversion takes place in order to absorb from our environment e.g. the retina, brain, inner ear and skin. It absorbs and converts forms of electromagnetic energy to be used by the nervous system. The darkness in melanin means it is able to absorb as the pigmented cells are capable of converting energy such as sight, sound etc.

Within the nervous system electrochemical process stimulate the transmission of signals which are transmitted as a nerve impulse. The properties of melanin aid in conducting nerve impulses to transmit signals.

In the skin melanin is made of smaller component molecules, and there is a variety of different types of melanin with different molecule bonding patterns. Pheomelanin (melanin red-brown in colour) and eumelanin (melanin which is black-brown in colour) are found in the skin and hair. It is eumelanin which is most abundant in humans and is most likely to be missing in albinos. Albinism is the complete or partial absence of pigment in the skin, hair and eyes due to the absence of or defect of an enzyme needed for the production of melanin.

Melanin is produced in melanosomes and stored as packages of melanocytes, with dark-skinned people having larger melanosomes. It is the spacing and amount of melanosomes that give the appearance of skin colour (Kittles 1995).

In pigmented skin the highest concentration of melanocytes is in the genitalia and nipples.

The pigmentation is affected by the presence of sex hormones estrogen and androgen. But even in the absence of these sex hormones the genitalia is still the darkest area on the body.

The skin is an organ of the body which protects humans from harmful ultraviolet radiation (UVR) which comes from sources like the sun. Melanin production is stimulated by light from the sun as well as artificial light.

The body has the ability to use UV light from the sun in order to make Vitamin D. Vitamin D is used in the body to turn into a hormone which stimulates the absorption of calcium in the intestines. Calcium is important to strengthen bones, aiding our metabolism and maintaining normal blood pressure levels. Almost 99% of calcium in the body is stored in our bones therefore our ability to absorb calcium is extremely important. The process of making Vitamin D begins in the skin; as light passes through the skin’s melanin layer it is converted into a substance called D3 which passes into the blood stream and then passed through the liver and kidneys to form Vitamin D.

There are billions of neuron cells found in the brain that conduct electrical impulses. Neurons are connected to each other making an immense and complex neural network. Each neuron receives thousands of electrical inputs from one another. Impulses arriving at the same time are added together to make an electrical discharge aka ‘nerve impulse’.

Neurons are found in the brain and spinal cord aka the central nervous system (CNS), and peripheral nerves system (located outside of the CNS and connects the CNS to organs and limbs of the body).

Brain neurons that contain melanin are called neuromelanin. Neuromelanin is mostly found in neurons whose primary signal is dopamine. Dopamine is a chemical signal sent between neurons and cells controlling many different roles of the brain. It has extremely powerful affects on the brain processes that control emotional responses, the ability to feel pleasure and pain, our mood, attention and learning; as well as playing a major role in addiction. Dopamine is important because it is crucial to the reward system. This system of the brain provides feelings of enjoyment and motivates people to perform certain tasks which naturally releases dopamine when experienced i.e. food, sex and drugs.

Melanin is found in neurons responsible for sending signals of dopamine. Melanin’s power to absorb makes experiences even greater and addictions for those with melanin cause them to suffer most as the melanin present in the brain can absorb so much.

In the brain stem there are 12 centres of black melanin including the locus coeruleus (black dot) and the substania nigra (black substance).

Locus Coeruleus = black dot. Supplies a principal nerve supply to many parts of the brain This site of melanin in the brain is said to be involved in memory. Any malfunction in this area is said to result in amnesia.

The pineal gland releases the hormone Melatonin in the night which has affects on the brain which activates the Locus Coruleus to induce REM (Rapid Eye Movement) sleep. In this state of sleep the brain is most active and dreams often occur.

Substantia nigra = black substance.
The substantia nigra is said to play a huge role in reward, addiction and movement. Dopamine neurons are said to be in the SN, and is said to predict which actions will lead to reward i.e. food and sex.

Upon autopsy the Substantia Nigra and Locus Ceruleus are easily visible due to their dark colour.

Melanin can be found in the hair, it only takes a small amount of melanin to make hair black.

African 9ether hair is made to absorb the naturally occurring electromagnetic waves (made of electrical and magnetic forces) in nature. Many scholars state that hair is for the protection from the cold which may be so for many people however for African (Black) people our hair goes up; it does not cover our bodies. This could indicate that our hair has a different purpose than just warmth.

The eye is part of the visual pathway. The retina is a melinated layer of cells. This is essential for the detection of colours; and without melanin in the pigmented layer of the retina all life form is blind.

The acute sharpness of our vision is dependent on melanin in the retina.

In terms of race hearing is better preserved in people of colour than in whites. Studies in the 1930’s showed patients in an American hospital from the same background found the hearing thresholds of African Americans to be superior compared with white males in the frequency range above 2kHz and the difference increased with age. Studies in the 1960’s on American conscripts from WWII and also studies in the 1970’s on over 800 dock workers found similar results.